WHEN sepoy Mangal Pandey triggered off the First War of Independence in 1857, Surendranath Banerjea was about nine years old. It is quite likely that the event must have had some impact on him, for he grew up in a turbulent phase of Indian history. There was revolution in the air, and with strong influences like Keshub Chandra Sen, Iswar Chandra Vidyasagar, and Bankim Chandra, Surendranath Banerjea was drawn into the eye of the storm. After a brilliant academic record, Banerjea went to England in 1868 and cleared the coveted Indian Civil Service exam. He was later disqualified because he was supposed to have crossed the age limit. Not the man to let the grass grow under his feet, he moved the Queen's Bench and won. After a brief spell as Assistant Collector, he was framed in a false charge, and dismissed in 1871. His fault: he was outspoken, and was an Indian.

A brilliant scholar that Banerjea was, there was hardly any dearth of jobs for him. He was soon offered the post of Professor of English at Vidyasagar's Metropolitan Institution. As he rose in stature, he founded the Rippon College in 1882 where he taught for the next 40 years of his life.

His revolutionary activities continued in spite of his teaching career. He took over the editorship of The Bengalee and converted into the most vocal organ of the Freedom Struggle. He was held for contempt of court once and sentenced to a two-month jail term. Back at his chair, he severely castigated Lord Lytton's Vernacular Press Act, opposed the Criminal Law Amendment Bill, and the Criminal Law emergency Powers Bill recommended by the Rowlatt Committee. "The triumphs of liberty are not won in a day," he told his countrymen, "Liberty is a jealous goddess exacting in her worship and claiming from her votaries prolonged and assiduous devotion."

A man of unusual foresight, Surendranath Banerjea played a leading role in the first meeting of the National Conference held in Calcutta in 1883, but when the Indian National Congress was formed in 1885, he was conveniently ignored. He attended the subsequent sessions of Congress, and presided over the annual sessions in Poona (1895) and Ahmedabad (1902). He made his voice heard when leaders like Tilak, Lala Lajpat Rai, Ajit Singh and Dr. Annie Besant were arrested. He was deeply hurt when the Moderates parted company from Congress.

When in 1905, defending his decision to partition Bengal, Lord Curzon declared, "Bengal partition is a settled fact", Surendranath Banerjea shot back, "I shall unsettle the settled fact." Curzon ignored the words, failed in his sinister plan, and went on to make an inglorious exit from India.

Known for his fearlessness and an inflexible will, Surendranath Banerjea earned the sobriquet 'Surrender Not Banerjea'. But this diehard nationalist made one tactical mistake. At the time when responsible leaders were either denouncing or returning their knighthood, Banerjea accepted one in1921. The immediate result was that in the election to the Provincial Legislative Council held in 1923, he was defeated by a non-entity like Dr. B. C. Roy. It is sad that this doyen of nationalism found himself totally isolated from his people in later years of his life.

"A few shone more brilliantly and with purer lustre," says Srinivasa Sastri in his tribute to Surendranath Banerjea, "but none excelled him in magnitude or spread of illumination. In steady periods and glittering phrases he formulated the ideal of Indian nationality and taught the full meaning and scope of Indian patriotism. Surendranath was the morning star that heralded the dawn of our public life."

Another stalwart, Bipin Chandra Pal said of him: "The one fact that stands out, above all else in the life and work of Surendranath Banerjea is that he occupies a front place among that glorious band, headed by Raja Rammohan Roy, whom history will proclaim to the future generations of his and other lands as the regenerators of modern India"

Posted by Dr Kuldip Kumar Dhiman at 6:58 AM 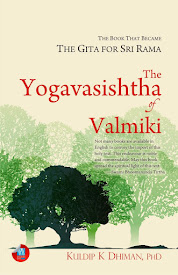 Rajneesh Osho and his philosophy 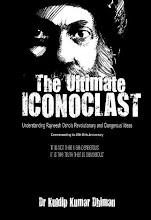 Emotion: The Essence of Life

Dr Kuldip Kumar Dhiman
I am a student of philosophy, philosophical psychology, literature, self-knowledge, art, science etc. I am currently doing research in Indian philosophy and psychology. My areas of interest are Vedanta, Samkhya, parapsychology, evolutionary theory, evolutionary psychology, Western philosophy etc. I have had three books published: Emotion: The Essence of Life (based on my PhD thesis); The Ultimate Iconoclast: Understanting Rajneesh Osho’s dangerous ideas; Param Vidrohi (Hindi version of The Ultimate Iconoclast). I have also done work in parapsychology, and have investigated cases of reincarnation. A paper about post-death bodily possession which was co-authored with Prof Antonia Mills of University of North British Columbia, Canada was published in the Proceedings of the Society for Psychical Research, London in October 2011. Another case suggestive of reincarnation which I investigated has been accepted for publication in Paranormal Review, which is published by Society for Psychical Research.